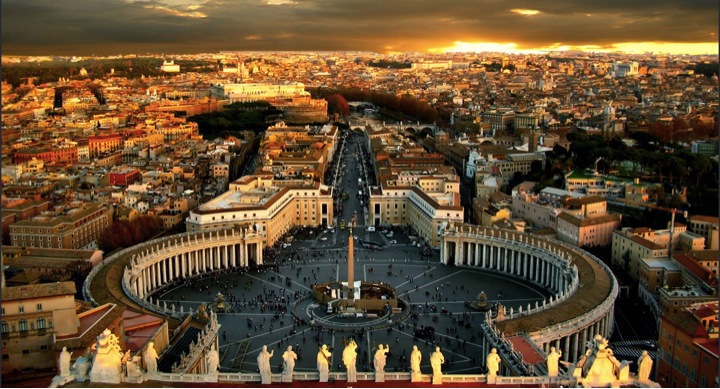 Italy is a European country covered by ocean on three sides and it has a wonderful culture, cuisine, and a diverse natural beauty. Right from snowy mountains, sandy beaches, and crystal clear water seas, the country attract tourists with its diverse nature. It is known for its best of pasta recipes.

There are a bucket list of wonders of Italy that are a must visit for nature enthusiasts and tourists.

Rome the capital city of Italy is a cosmopolitan city with more than 3000 years of rich heritage of arts, architecture, and culture. Ancient ruins of Colosseum, Roman Forum shows the power of ancient Roman Empire. St.Peter’s Basilica in the headquarters of Vatican City and Vatican Museums, which has Michealangelo’s iconic painted ceiling in Sistine Chapel, are the topmost tourist attractions in Rome.

Known to be one of the most romantic places in the world, Venice is a city that has streets made of water, and eventually, boats are the means of transport. The central square known as the Piazza san Marco has the beautiful Saint Mark’s Basilica. This church is decorated with 4,240 square meters of gold mosaics in its dome and walls. The altarpiece made of gold is adorned with nearly 2,000 gems and precious stones.

Doge’s palace is a palace built in Venetian Gothic style architecture. This palace is known for its luxurious and sumptuously rich decoration and grandeur.

Florence is the most famous Tuscany city and was the center of European trade and finance in the medieval age. It is known to be one of the wealthiest cities at that point of time. The city’s important church, Cathedral of Santa Maria Del Fiore, has gravity-defying huge domes and is one of the world heritage sites. The other tourist charms in Florence include Uffizi Gallery, Pitti Palace, and Galleria dell’ Accademia.

The leaning tower of Pisa is one of the iconic places in Italy situated in the City of Pisa in the Tuscany region of Italy. The city is home to some 20 historic churches and medieval palaces. Lucca is Italy’s charming town surrounded by huge walls. Inside this town are the beautiful Romanesque, Roman arena, tower houses, and Gothic architectural churches.

The Hot Springs of Saturnia, situated at a distance of 6 km from Saturnia, is known as “Cascate Del Mulino” and one of the world’s famous geysers in Tuscany. The volcanic water is rich in minerals and its temperature is around 37.5 °C. According to legend, this water spring was formed when Jupiter tried to attack Saturn with lightning bolts and they fell here.

The Italian Riveria has a rugged coastline, and Cinque Terre is a string of old seaside villages on them. The fishing hamlets were not connected until the railways connected them. They are picturesque and hosts colorful houses and vineyards clinging from its terrace.

This Royal city of Roman was encased by the eruption that happened in the Mt. Vesuvius in AD 79 and was filled in six meters of ash. When the excavations happened later in the 18th century, the city got uncovered and its buildings and public places came into view. The same lava came raining down the city of Herculaneum covering the entire place and preserving the buildings in place. This is an archaeological site and features the ruins of streets and houses of the city.

There are many more wonders in Italy that reveal the existence of the great Roman Empire. Besides, there are many beaches, snowcapped mountains, and other natural tourist places. Covering them all in one travel is not possible. So, explore the topmost destinations asyou’re your preference from a big list. “Benvento in Italia”—as they say welcome to Italy and explore more!